Kale is also known as ornamental cabbage, and it belongs to the cabbage, broccoli and cauliflower family. The leaves are flat and broad with contrasting colors. Kale grows best between October and November in full sun. They thrive in cold weather, and an interesting fact is it affects the color of the leaves. When temperatures drop blow 50 degrees Fahrenheit, shades of pink, purple, red and violet emerge.

Kale Brassica is native to the Mediterranean region of Europe. More than 2,000 years ago, ancient Greeks cultivated the leafy green, and it has been documented that they boiled it to cure hangovers. Julius Caesar consumed kale before royal banquets to prevent indigestion. As early as the first century, “coles” arrived from Britain and France via the Roman Empire or the Celtics. By 1669, kale made its way to America via English settlers. 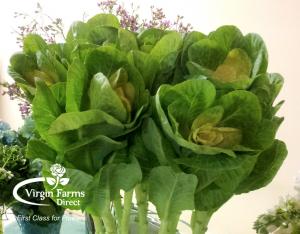 The use of decorative vegetables and fruits in floral designs is very common. It adds an interesting twist to an otherwise common bouquet, giving it an organic appeal.

Suggest a variety for us to feature on Flower Fact Friday. Leave a comment naming the variety, and we’ll write about it. Stay tuned next week!