Fact Friday: The Legend of Cantuña 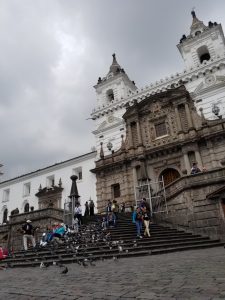 Legend has it that the 16th century San Francisco church was constructed on a pact with the devil.

An indigenous native named Cantuña, was hired by the Franciscan friars to complete the project in six months. Catuña and his men worked tirelessly but much was left to finish.

On the eve of the deadline, the devil appeared. Taking advantage of Catuña’s desperation, the Devil offered to help in exchange for his soul. The indigenous man accepted, but clarified that every last brick must be laid otherwise the pact was void.

All the little devils began to work and managed to progress quickly. Before daybreak, the boastful Devil was ready to claim Catuña’s soul as the church appeared to be complete. But the native exclaimed it was not finished as promised for a brick was missing. The Devil, feeling humiliated, left in fury with an unclaimed soul. Catuña was spared thanks to his wit, because before the devils began the labor, the native hid one of the bricks knowing this would be his saving grace.

This story has been told for many centuries, and to this day it is said one brick is still missing. So if you ever visit the San Francisco church, let us know if you find it!


Warning: count(): Parameter must be an array or an object that implements Countable in /home/customer/www/virginfarms.com/public_html/wp-content/themes/florist/footer.php on line 11